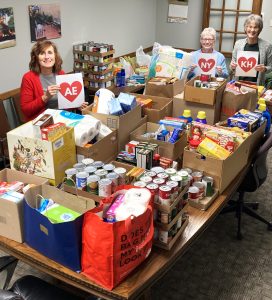 It was late November in the southwestern part of Iowa.  To be exact, it was the town of Clarinda, the Page County seat.   Things were buzzing at the local Chamber of Commerce where the director and her staff were busy with Fall activities quickly approaching.

A note of interest in the community was the talk of the town.  The two local food pantries were sending information to the churches and other local entities regarding the shortage of inventory on their shelves.  One of the three Clarinda P.E.O. chapters was holding their local meeting.

Word had spread throughout the community regarding the scarcity of needed items.  Chapter KH was holding their regular monthly meeting.  P.E.O. members are always keeping watchful eyes on the needs of the community.  When President Sharon McAlpin called for suggestions for the good of the order, the needs of the local food pantries were mentioned.  WOW!  That stirred the group into one big chorus of animated discussion.

Many ideas were tossed around….to and fro…up and down…when all of a sudden, a loud voice penetrated the room saying, “I HAVE IT!”  The din of excited females’ voices hearing those words settled into an almost eerie silence as all eyes were focused on Marcia Cline.  Someone yelled, “WHAT IS IT?”

Marcia then replied in a loud, excited voice…”A CHALLENGE!  Let’s challenge our sister Chapters NY and AE to a PANTRY DRIVE.  We will set dates for the Drive to begin and end.  We will see which chapter can collect and donate the largest amount.  It can include the needs in food stuff or monetary donations or both.”  The room resounded with the echo over and over of the following chant…”LET’S DO IT!”.

So, the challenge was made to President Gail Wallin of Chapter NY and President Georgia nelson of AE, and the race was on!  All three P.E.O. chapters worked diligently involving others in the community to join in the effort.

The office of the Clarinda Foundation (where P.E.O. members Beckie Finch and Gail Wallin work) was the headquarters for dropping off the gathered items.  It was quite a collection center where the tables had the individual sign of their chapter and the bounty was placed in the correct area for credit.  The tables were checked daily by the “detectives” of each chapter.  Much camaraderie was evident within the three chapters, and in the community as well.

You will notice in the attached picture a portion of the extreme mountain of items collected.  Looking on are: Vice President Jayne Davison of AE, President Gail Wallin of NY, and President Sharon McAlpin of KH.

We are delighted to report that through the CHALLENGE, we garnered over 4000 individual items, along with monetary donations.  These were divided between our two local food pantries, the Methodist Church Sew and Share pantry and the Clarinda Community Center.