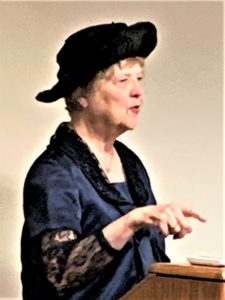 Chapter ML recently enjoyed a performance by Linda Hughes of Charles City. She expertly took on the persona of Carrie Chapman Catt, also of Charles City, who led a successful campaign to win voting rights for women. In 1920 Catt founded the League of Women Voters upon ratification of the 19th Amendment to the U.S. Constitution. This year marks the 100th anniversary of women’s right to vote—August 28, 2020.
Carrie Chapman Catt’s girlhood home in rural Charles City is open to the public and administered by the National Park Service. Chapter ML visited this site several years ago to learn more of Catt’s life on the prairie as well as her fight for equal suffrage.